I’m aching all over. I have bruises on my legs, body and even my face. I’m walking with a distinct limp, have a mild case of whiplash and even after three strong coffees my eyes are being held open with cocktail sticks. 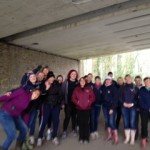 This can mean only one thing. The Monmouth Massive has been on tour again. This weekend Monmouth rocked up in Brugge with a fantastically loud, 38-strong Welsh contingent. To race on St David’s Day. Uh-oh. This was only ever going to end one way. The last few years have seen a fine tradition of annual rowing jollies (by which I mean, of course, national and international racing) and the Brugge Boat Race is rapidly becoming one of our favourite venues. It may not offer racing under blue skies and glorious sunshine (borderline hypothermia, anyone?) but what it lacks in ambient temperature it makes up for with the warmth of its welcome and the quality of its night life. 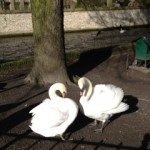 Anyway, I suppose I ought to start with the racing. The Brugge course isn’t the most scenic (unlike the city itself, which is beautiful) but it is enlivened by a thrilling bridge at the start which requires gymnastic contortions to prevent a nasty beheading scenario (happy to report everyone’s heads are still intact). Our senior men excelled themselves and took the Men’s Masters title.  The Vet G men didn’t get a win, but took another crew on the start and were smiling and on the beers when we next saw them. The women’s Not-A crew (cough) steamed past the Not-Bs and narrowly missed second place (first place going to some German ladies rumoured to be ex-Olympians). My own (not-B) crew, well, hmmm, made it to the end, though not without some cuts and bruises from various protrusions in the boat (that, at least, accounts for some of my bruises). 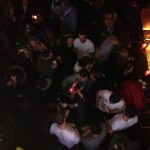 But, look. We may not have won the rowing, but I think we can safely announce that Monmouth won the après-row hands down (with Molesey coming a vigorous and decorative second and Bristol City a valiant third). Monmouth were the first to dance, the last to leave and, I’m fairly confident, the only club with a member escorted home by the police after wandering around, lost, for several hours – yup, we know how to party. We also established that the best rowers are not necessarily the best dancers (I’d like to say you know who you are, but I fear you don’t). And that the best dancers aren’t always the best rowers. And that you can sustain mild whiplash from headbanging. Ouch. 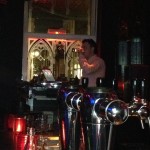 Party central. The real party is just out of shot.

I should also say that many more pictures were taken, still on my phone, most of them unsuitable for publication. I am happy to take bribes in cash and will also accept PayPal. 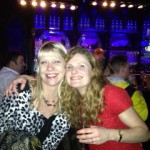 Winner of the cheesiest grin competition.

Huge thanks to Brugge Rowing Club for a superbly-organised event and for hosting us, feeding us and making us so welcome, to the good people of Brugge for putting up with the noise, to the mighty Jools for making it all happen, to Monmouth School for lending us a boat and to everyone who drove, coxed, towed, organised and supported. Can’t wait for next time.

* BORN TO ROW, FORCED TO SPIN * Still no rowing fo

* MY LITTLE SLICE OF HEAVEN * Tell me where you ro

Shout out to all the single scullers - the single-