Chatty woman – Girl on the River takes the mic Anyone who gets to know me soon becomes aware that I like to talk. If there’s a lull in conversation I feel compelled to fill it and I’m rarely lost for words.  I’m the one they seat next to the awkward, monosyllabic uncle at weddings. I even talk to myself. So perhaps it should have been no surprise when my elders and betters approached me as a likely candidate when they were casting around for new people to commentate on this year’s regatta.

I can’t deny I was slightly daunted by the prospect. Commentating isn’t just endless blether. You have to be able to identify the event and the crews correctly – not always obvious when race orders and line-ups change, empacher numbers go astray and bib numbers become obscured. You have to come up with something reasonably sensible to say about each race, other than where on the course they are. You mustn’t say anything that would be too offputting if heard by the racing crews – and it wouldn’t do to be over-critical of any of them (even if they’ve just done something spectacularly dumb). You have to remember to mention the sponsors of each race (but not too much – this isn’t commercial TV). If you can, you have to create a little excitement without going all John McCrirrick. And if there’s a hiatus in racing you have to fill the silence without bruising everyone’s eardrums. View through the lens

I was acutely aware that I had some big shoes to fill. Over the years we’ve been lucky enough to have some highly-experienced commentators who’ve combined a depth of knowledge with a lightness of touch I couldn’t even begin to match, especially with a paltry six years’ rowing experience under my belt. Who am I, after all, to comment on the tidiness of someone’s stroke or to judge their racing line, especially after my own, humiliating experience of steering at Evesham? In rowing terms I’m an upstart, a newbie, a mere whippersnapper.

Oh, and there was one other thing. I was to be the first female commentator our rowing club had ever had. While this is hardly breaking the glass ceiling in any serious way, I was aware there might be some in the crowds who would raise an eyebrow the first time they heard my voice coming over the sound system. I felt I owed it to the sisterhood to do a decent job. So I decided on the risky strategy of just being myself. After all, as a novice sculler still nursing bruises from my last race, I could say with considerable authority how hard it is to steer at race pace going backwards. And having been in charge of sponsorship for three years, I knew quite a lot about our esteemed sponsors. Of course I made the odd mistake and I’m sure there were times when I talked too much or too little, but all in all it seemed to work.

As we sat back and reflected on the weekend over a well-earned beer on Sunday evening, our chairman said something interesting. “It’s not just your voice that gets amplified in the commentary; it amplifies your personality, too.” Lord alone knows what an amplified version of my personality is like – I chose not to ask – but I’m not aware of any actual complaints. A few people even professed to be pleasantly surprised by my efforts. 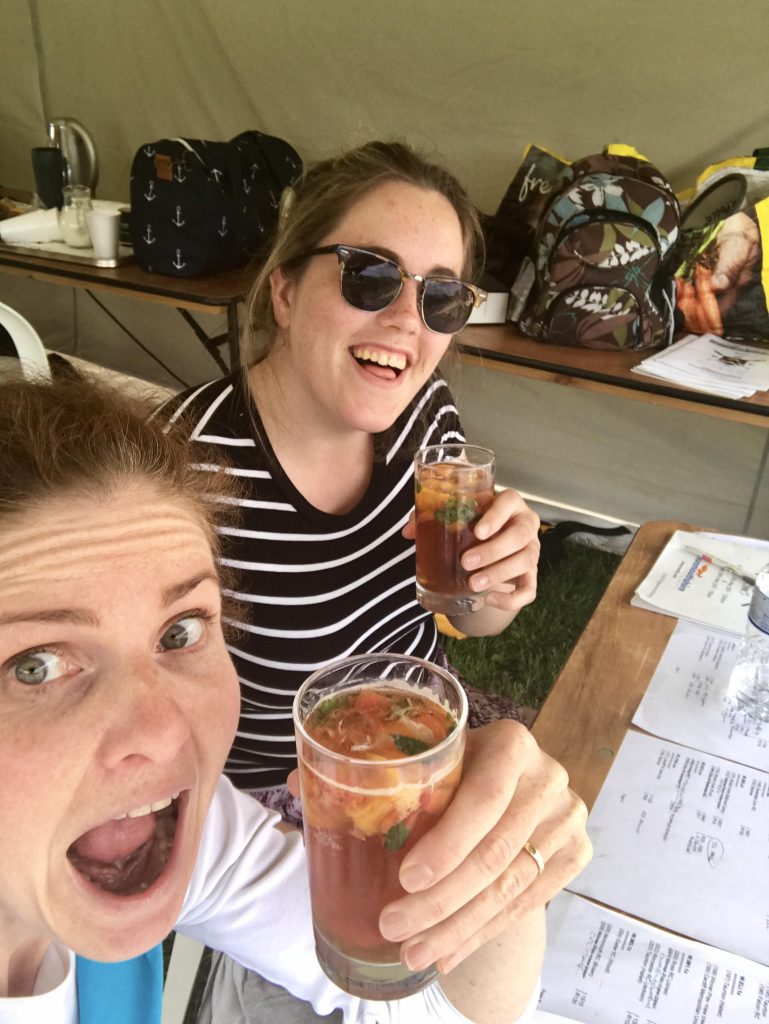 Being myself, aided and abetted by a glass of Pimms…

So I might have a long way to go before I can call myself a good commentator, but it was good enough for now. And as for that glass ceiling… well, I think there were a few shards of glass to sweep up at the end of the regatta.