If you’ve been following my erratic, wiggly journey up and down the river this summer you’ll be aware that this season, for the first time in my rowing career, I’ve been spending most of my time sculling. To my astonishment, having always seen myself as a sweep rower, I’ve discovered I prefer two blades to one. I’ve come to appreciate the symmetry, the finesse (in my head, anyway) and, best of all, the sheer speed of sculling. The problem is I’ve been spending so much time concentrating on steering a quad I’ve had little opportunity to even think about my technique. So it was a happy coincidence that this July I was invited to attend the annual Tyne United Masters Single Sculling Camp. Held on the River Tyne, the four day intensive course felt like just what I needed to lick my sketchy sculling into shape. The fact that it was in a part of the world I’d always wanted to visit was an added bonus. The view of the river from the club. They rashly promised me sun and, brilliantly, delivered.

I rocked up feeling quite nervous. I was pretty sure I’d be bottom of the class and was distinctly daunted when, during the initial briefing, I learned we’d be starting with a time trial to separate us into groups. I’d never done a proper piece in a single before and humiliation felt like it was waiting for me right there under the bridge. But hey, there wasn’t a plan B and I soon realised that the whole set up was designed to put us at our ease. Everyone was super-friendly, they plied us with fabulous cake and even laid on the most adorable puppies to play with (note to camp organisers: EVERY camp should have puppies – fun after a good outing, therapy after a bad one). Oh, and the impressive line-up of coaches (Henley winners, GB U23s, Leander, Molesey, etc.) meant that however shaky my first session was, things could only get better. 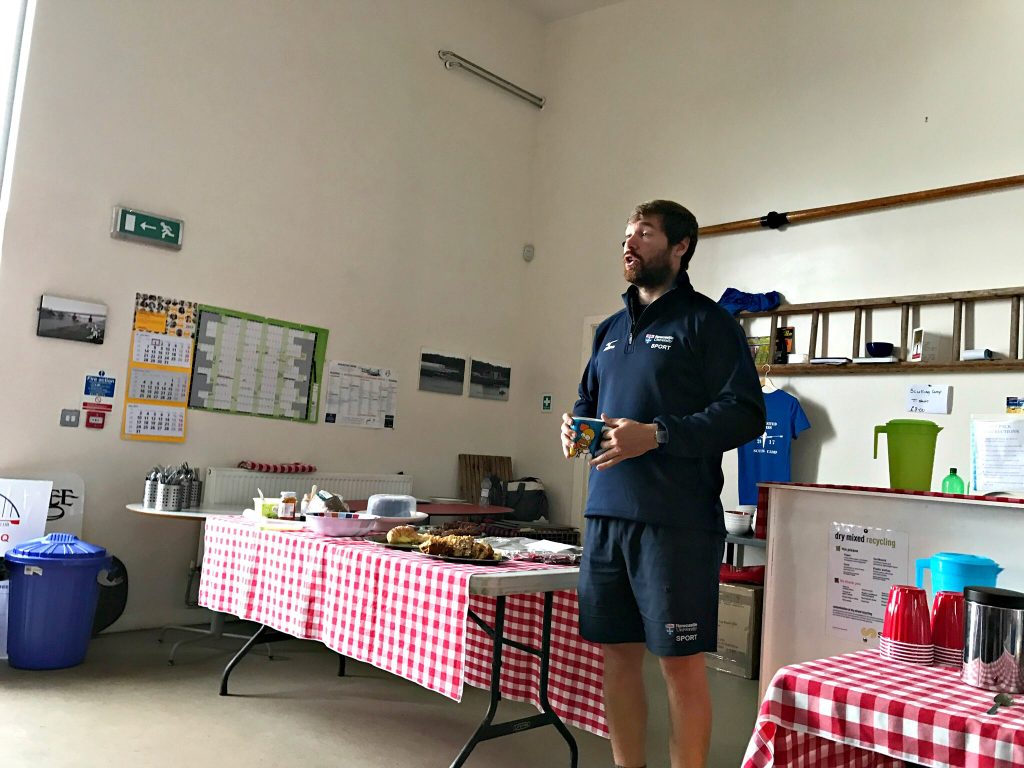 Look at that little face…

As I didn’t have my own single, a club member kindly lent me her boat and it turned out to be my dream ride. I’d braced myself for something a bit cumbersome, so when I was introduced to a cute little super-lightweight Swift in scarlet it was love at first sight. Things were looking up. 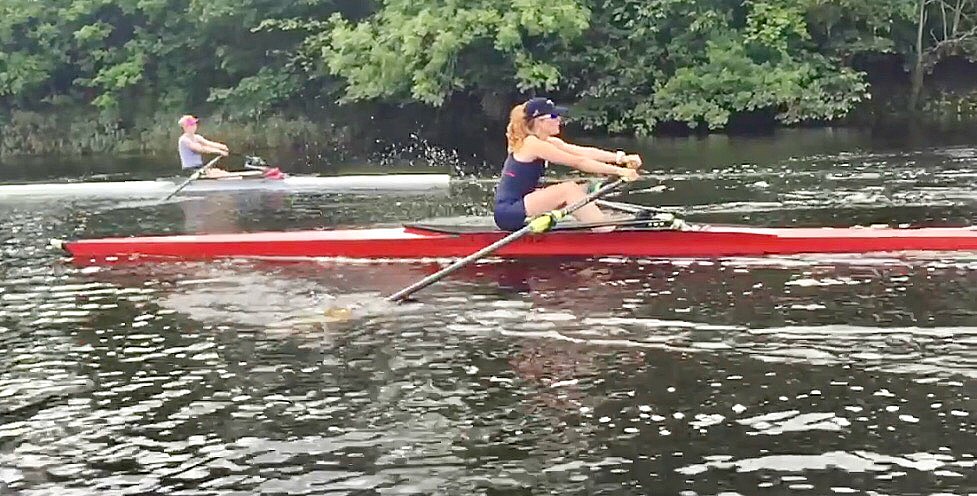 I set myself one target for the time trial – not to come last. We’d been told to cap our rate at 24spm, but without a stroke coach I had no idea what I was rating. I dug in and when I found myself passing someone I at least knew I had achieved that one goal. Phew. And then the results came in. To my astonishment I’d placed fifth amongst the women, which put me in the second of four groups. I was so surprised I went outside to check the number on my boat; I felt sure there’d been a mistake. But there it was. I was going to have to step up. I was the only real novice in my group so it was time to raise my game. Either that or I’d be moved down to a lower group, which would be too demoralising for words. Next up was a technical session over 9km. My lack of experience soon became pretty apparent – I struggled more than the others with square blade drills and had loads to improve on – but our coach, Nicole, isolated some issues for me to work on, and work I did. I enjoyed the luxury of rowing on a wide river without endless trees jumping out to impede my progress, and the contrast with my own river (we’d meet at industrial landmarks like the pylon or the car crusher) made it more interesting. A third, shorter technical paddle in the afternoon left me sore, tired and a bit punch drunk but I was already aware I was improving.

Another day, another coach, and this time a pretty paddle in the opposite direction where the scenery changed dramatically. Trees, greenery and flat water made it all much more familiar (and photogenic). Our coach, Jack, gave us some pointers and videoed us in slow mo. The second session involved video analysis in our group where we really broke down our stroke and figured out both good and bad elements, with advice on exercises to improve things. This was – for me at least – a bit of a revelation. I finally had a eureka moment when it came to what was going on at the finish. Equally importantly, I realised there were actually things I was doing right. I’d feared a video nasty, but I wasn’t as bad as I’d imagined and this was a huge boost to my confidence. 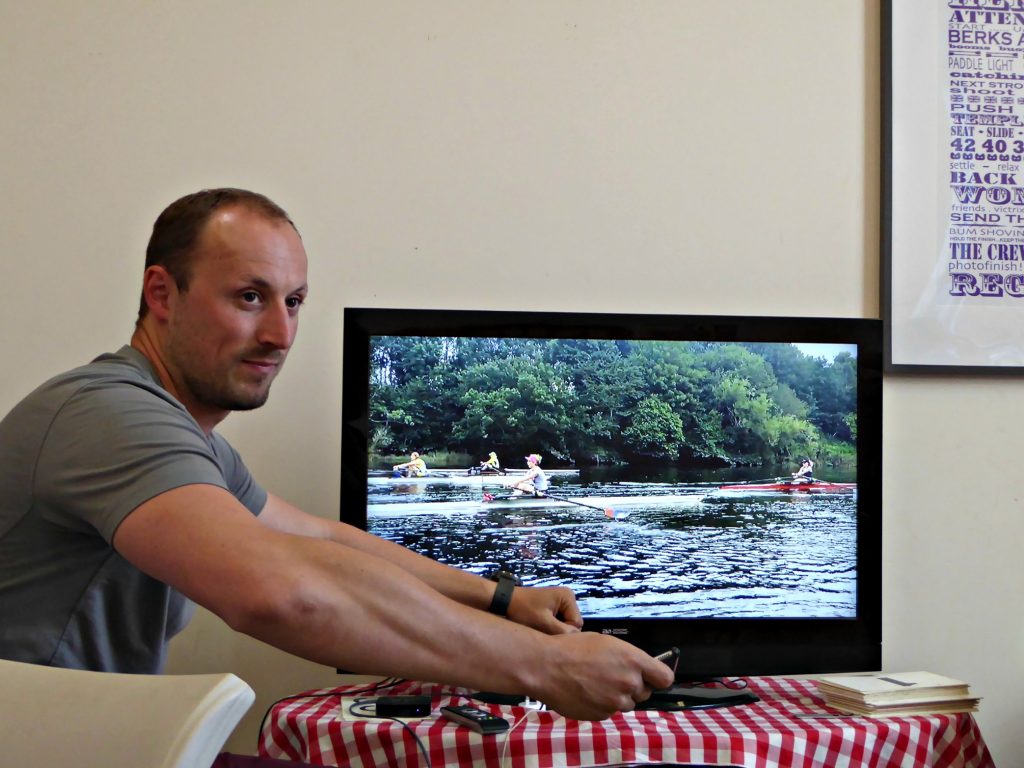 Jack talks us through…

The final session of the day allowed us to consolidate what we’d learned in the morning and in the final three minutes of the session I felt as though I suddenly understood how it should feel. What I really needed now was a good, long paddle to put it all into practice. Which leads me to…

The one I’d been waiting for – the Long Row. This was a 22km paddle into the centre of Newcastle and back which, weather permitting, is one of the highlights of the camp. Groups 3 and 4 decided not to join us, staying back for a skills and drills session. This was a bit of a shame for me as it meant only the strongest, most competitive rowers set off on the trip, so it was a more purposeful row than the chatty paddle I’d expected. Within half an hour I’d started to fall behind (perhaps I’m a sprint rower at heart).

I can’t deny it was tough. After two days of doing more than I was used to I was already tired, with a few of the dreaded M.E. symptoms starting to show again, and there were times when I had to give myself a stern talking to. By the end my hands were in pieces and my muscles begging me to stop.

And yet it was totally, TOTALLY worth the exertion. The reward was a spectacular, triumphant arrival into Newcastle city centre, under a succession of wildly different bridges, culminating in the gleaming Millennium Bridge. It was magnificent. 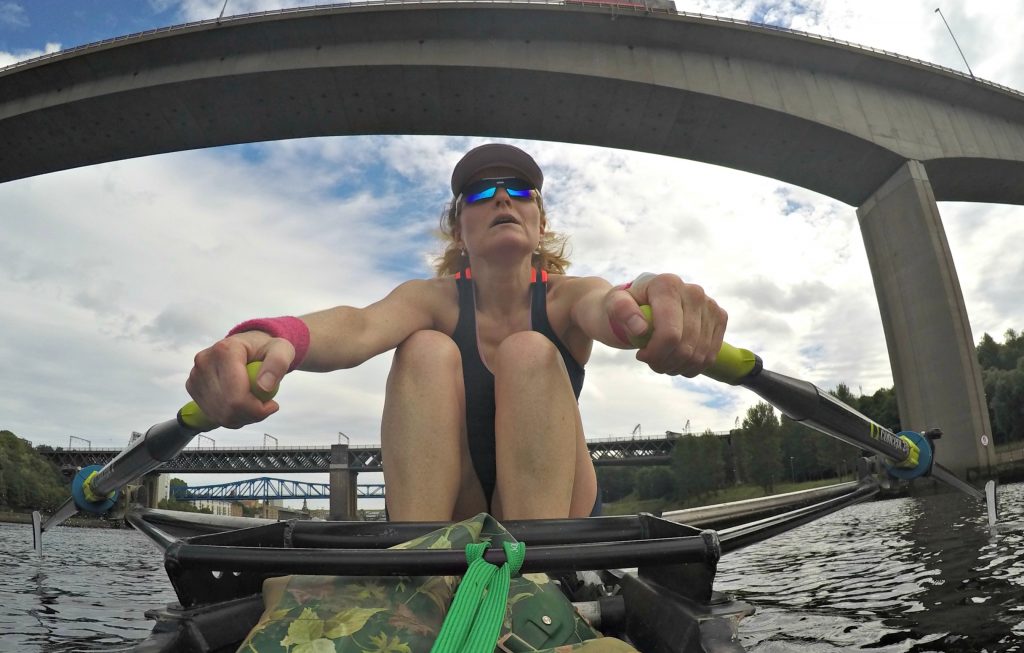 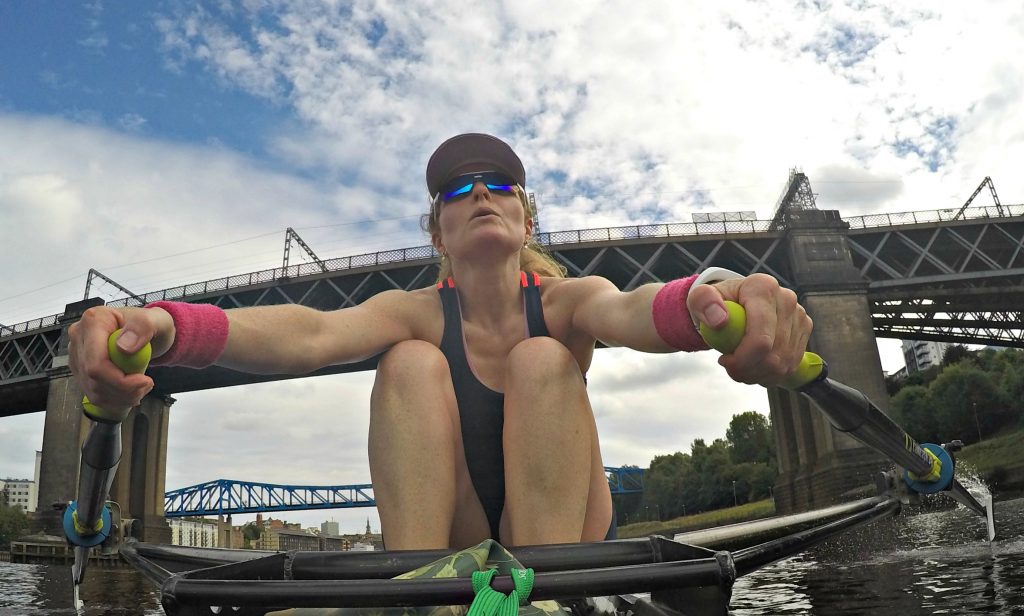 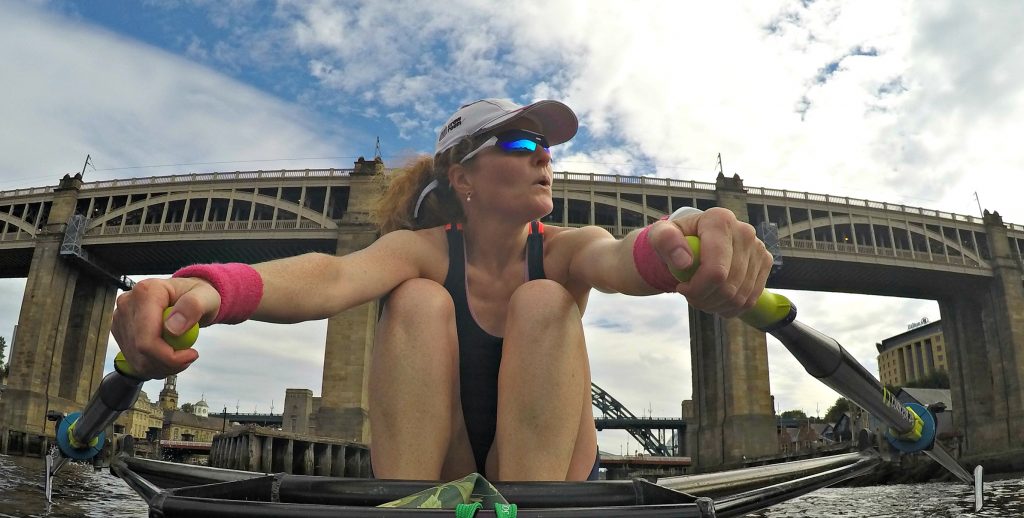 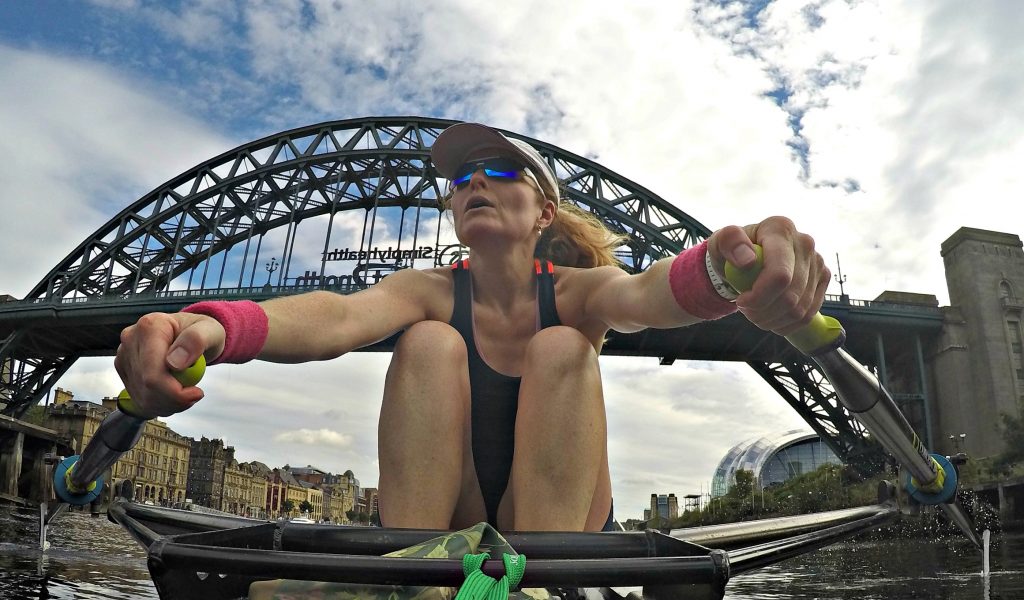 And finally, the Millennium Bridge… What an amazing way to see the city for the first time, and what a sense of achievement I felt as I joined the flotilla making its way through the beating heart of the city. View from the Millennium Bridge. Pic by Alex Shiel

By the time I returned to the club I was barely able to speak or even eat (almost unheard of for me, on both counts) and was feeling pretty light-headed, so I was relieved to hear that our afternoon was land-based. We had a brilliant rigging session with Alex – essential if you’re setting up your own boat – and then hit the tank. TURC has a majestic, eight-seater sculling tank which allows you to get to grips with your stroke without worrying about capsizing. I wasn’t the only one suffering major tank envy. A fierce little core session with two of the coaches made sure that by the end of the afternoon I was hard-pressed to identify any part of my body that wasn’t aching, and I picked up a few extra core exercises I hadn’t tried before.

Not gonna lie, I was a bit of a mess by Day 4. Still dizzy with fatigue from the day before and sporting a painful collection of rips on my hands, one of which had become infected overnight, I wasn’t at my best. Racing starts with Alex were on the agenda, though, and I was determined not to miss those, so a kind member of my group strapped up my hands and I took to the water. The starts were exciting and not nearly as scary as I’d expected, but the final time trial that followed was less successful. By this point I’d crossed the line into Officially Exhausted and didn’t put in a particularly impressive time (not helped by catching a crab mid-time trial and the strapping rucking up so I couldn’t control the handles).

It was time to admit defeat. There was still a mini-regatta to come, with everyone doing two races side by side, but I was all in. It takes a lot to make me turn down a chance to compete, but I knew it was time to quit, so I watched the racing from the launch and enjoyed seeing the progress everyone had made.

All that remained was the group photo and promises to stay in touch. I can honestly say the camp made a huge difference to my sculling. I grew massively in confidence – so much so that I’ve entered a regatta in a novice 2x in a couple of weeks’ time and wouldn’t rule out racing in a single. The coaching was absolutely brilliant and I loved the fact they rotated the coaches every day. We were so well looked after by the cheerful, hard-working team at TURC who produced amazing food to fuel our efforts and made us feel so welcome. Best of all, I’ve come away with a whole new bunch of friends and a promise to enter the Great Tyne Row next year.

I’d thoroughly recommend the course to anyone – at any level – who is serious about improving their sculling in a friendly, positive environment. And especially if they like cake. And puppies.

PS Where to stay

There are loads of options locally, but I should just mention the excellent Air BnB where I stayed – Hollybush Villas, a one bedroom apartment in Ryton, five minutes from the club. Quiet, modern, immaculate and with chickens in the garden (and a box of their amazing eggs for good measure). Highly recommended, and they’re putting in another,  two bedroom cottage for next year. Where I collapsed most nights! 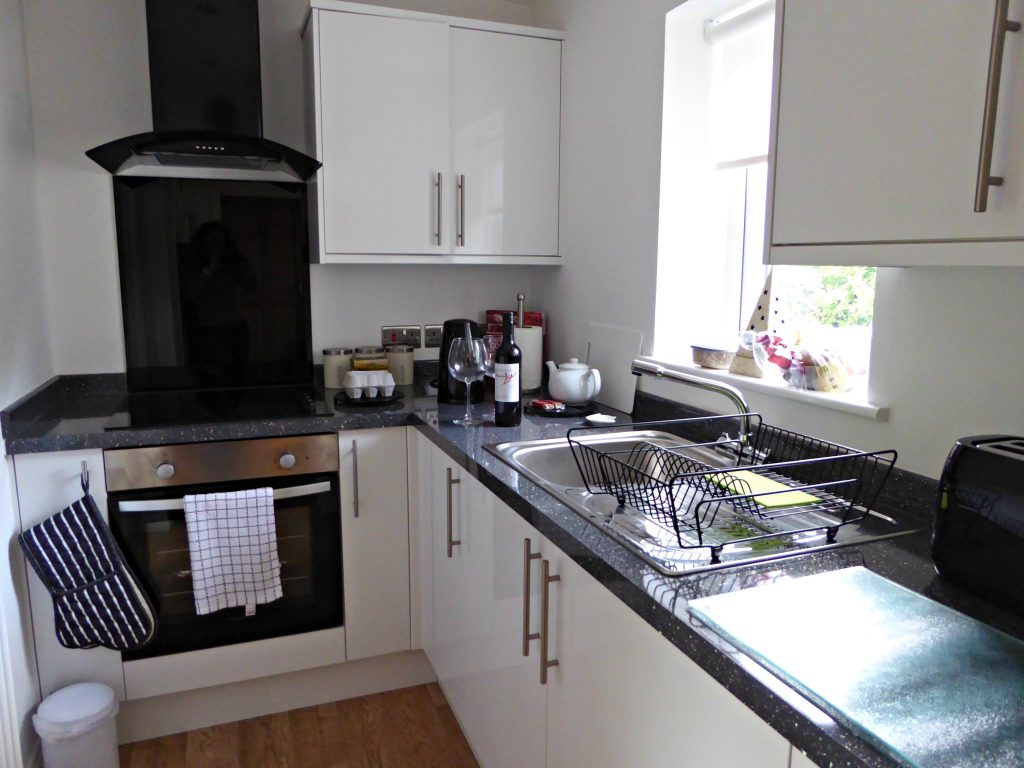 Disclosure: My place on the TURC Masters Sculling Camp was given to me free of charge but I have received no payment for this review and as always my opinion is independent and honest.