The one where I end up in an ambulance… 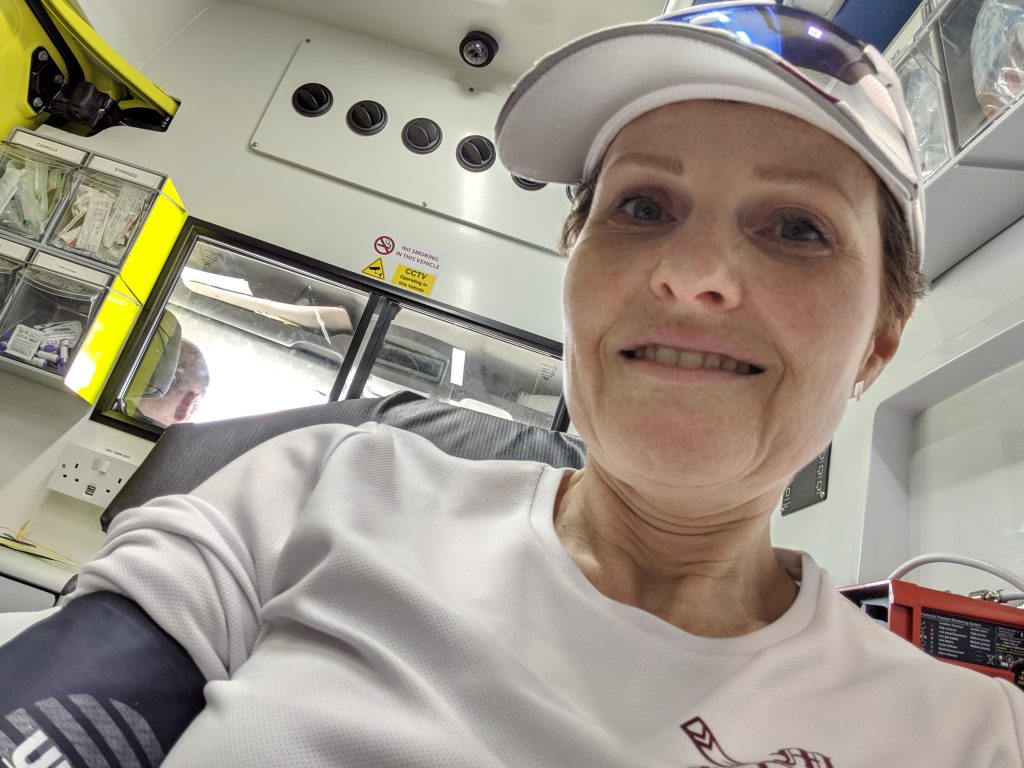 It started with a grandiose plan, as so many things in my life do. In a sudden rush of blood to the head I signed up for the World Masters Championships in Hungary in September, not really thinking too hard about what that might involve. I knew I wasn’t really worthy of a place in a crew, but I was willing to cox and knew there might always be someone from another club desperate for a sub when I got there. Then a foolhardy friend offered to enter a double with me, so before I knew it I was actually going to be rowing (or rather sculling) at the Worlds as well as coxing. Which meant that I urgently needed multi-lane practice.

Along came Nottingham Masters Regatta this weekend, conveniently offering 1km PRI-banded races on our favourite multi-lane venue, Holmepierrepont. Perfect. Except for one thing.Two things, actually. First, I’m still building up my stamina post-chemo so wasn’t going to have much in the tank. Secondly, I’m still on immunotherapy jabs every three weeks which leave me under the weather for a few days and I had one of my jabs just two days before the regatta. But still, multi-lane races are few and far between and it was too good a chance to pass up, so we threw caution to the winds and entered our double anyway, on the understanding that we’d probably come last but would treat it as practice and a useful marker at the start of the season.

Arriving at Nottingham, we wondered if we’d come to the wrong place. Bathed in sunshine, with blue skies, glassy water and not a breath of air, it was a far cry from my last experience of HPP when it was blowing such a hooley half the races were cancelled. Nottingham Masters proved a lovely regatta – calm, friendly, low key, run like clockwork, excellent prizes. So all that remained was the small matter of the race itself. 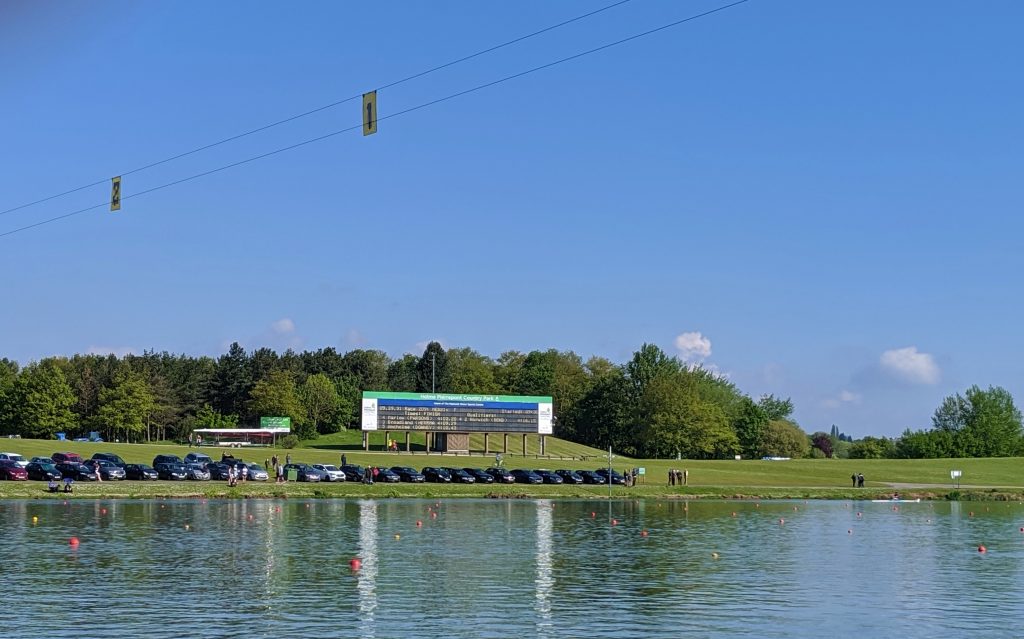 As my partner in crime and I don’t have any sculling points we were in Band 2 with just Sudbury and Broadland to contend with. After a catastrophic practice start (crab, near-capsize) our start was a bit like a second serve in tennis – a bit tentative – and Sudbury surged ahead immediately. We held on to second position but try as we might couldn’t make up the distance and lost by three or four seconds, I think (haven’t seen the results). Anyway, it felt like a decent race – incredibly tough, as all races are, but no disasters. The video clips I’ve seen confirmed the areas I already knew I needed to work on but didn’t show anything new, so that was all great.

Until we got off the water, that was. I expected to feel a bit wobbly until I’d had something to eat and drink and got my breath back, but an hour later I was still feeling lightheaded. As the medication I’m on can affect your heart, this was something to take seriously. I’d been given the OK by my medical team to do strenuous exercise and I have regular heart scans which have all been fine, but still, I didn’t want to take any chances, so I sidled up to the first aid cabin when my shipmates weren’t looking and asked if they’d give me the once over.

I thought they’d just take my blood pressure and send me on my way, but before I knew it I was in the event ambulance attached to a tangle of wires, having an ECG and various other checks. The crew couldn’t have been better or more thorough. It turned out I was running a temperature (quite common on the medication I’m on) so they gave me paracetamol, and my blood pressure was a little elevated (hardly unusual, given that it was race day and I still had a race to cox) but my heart was just fine and my oxygen saturation was perfect. Several more checks and a lot of questions later I was given the all clear and sent on my way. 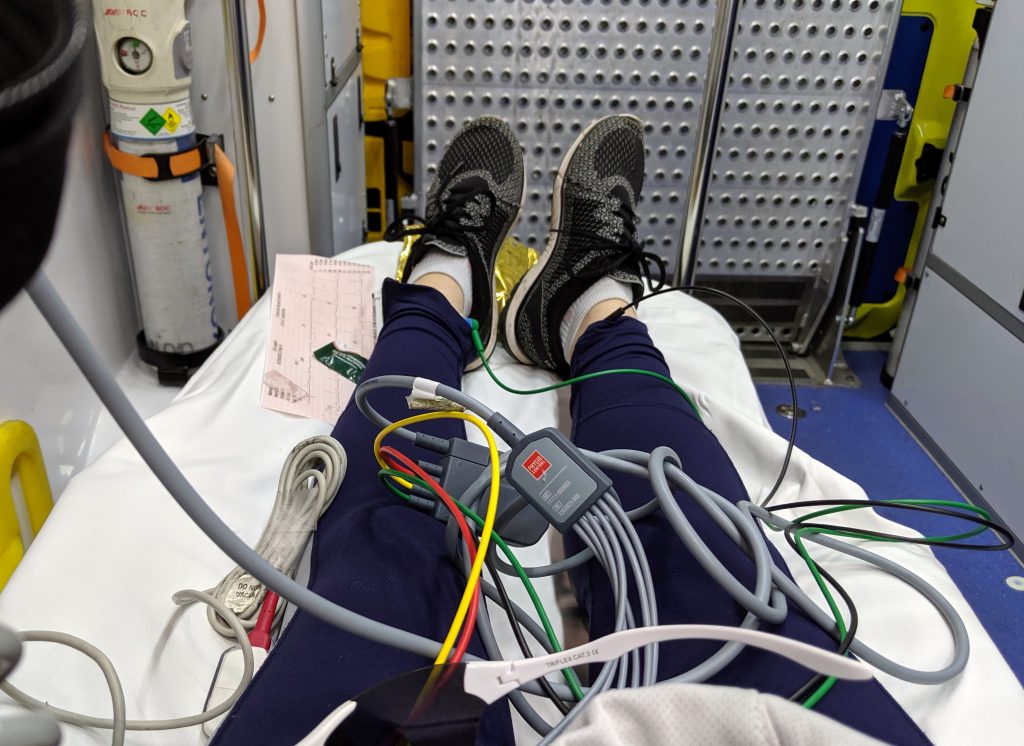 Sadly we didn’t win in the race I was coxing later in the day (pretty disappointed not to come home with one of the superb hip flasks they were awarding for masters races) but I came home with an ECG printout as a souvenir, and at least I was able to get that vital practice manoeuvring on to the stake boat.

So what’s next? Well, once I’ve had a good rest (before you start fussing!) it’ll be back on the river to work on technique, back in the gym to work on strength and back on the erg to work on fitness. Business as usual. In the meantime, a massive thank you to Nottingham City for an excellent regatta and to CMS ambulance services for looking after me so brilliantly.