Side-by-side rowing, saunas and skinny-dipping – seventeen do the Sulkavan Suursoudut It was about 20 minutes into the Sulkavan Suursoudut that the sheer madness of the whole enterprise dawned on me. What was I even thinking, entering a 70km race without any training? Seriously, what? I had, after all, trained extensively for the Great Ouse Marathon – a mere 22km – with long ergs and longer river outings, so why had I even begun to imagine that racing three times that distance, over two days, with a night at a campsite in the middle, was a sensible idea? But it was 20 minutes in and too late to change my mind. And since we were by this time leading the field it seemed like a good idea to dig in and carry on. So I did.

But let me rewind. It was almost exactly a year ago that someone first floated the idea of entering an endurance race in Finland. I was instantly enchanted by the idea. I’d always wanted to visit the Land of the Midnight Sun and if I could combine it with rowing then that was doubly appealing. I can’t deny I was daunted by the distance, but when I learned I’d be rowing in a coxed 14 (yep, 14) it sounded like too much fun to pass up. I had fully intended to train for it, imagining ever more gruelling sessions on the rowing machine. But somehow the months passed and regatta season began and somehow it never happened. Still, I was going to Finland! It just sounded amazing. 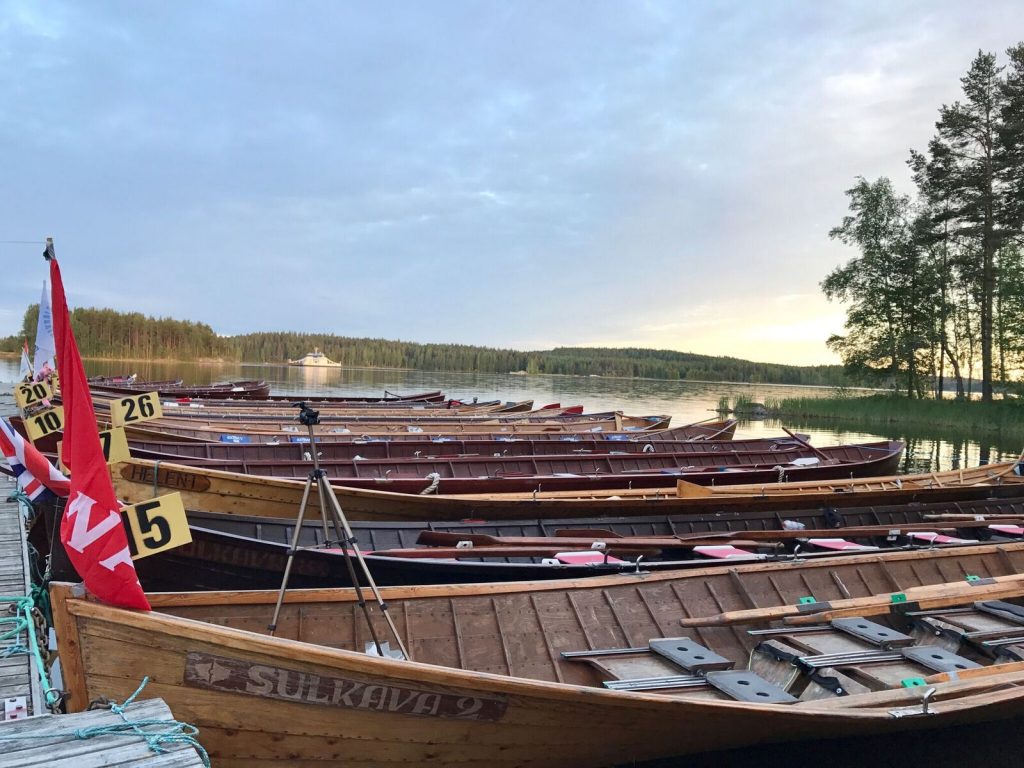 What’s not to love?

And it was. Sulkava, deep in the Finnish archipelago, was as lovely as I’d hoped and the traditional Finnish church boats we were racing in were a thing of beauty. You sit two abreast – so much more fun with someone to talk to and keep your spirits up – and row with square blades. Timing, needless to say, is everything, and it took us a little while to get the hang of it (a practice run the day before the race was a hilarious learning experience). 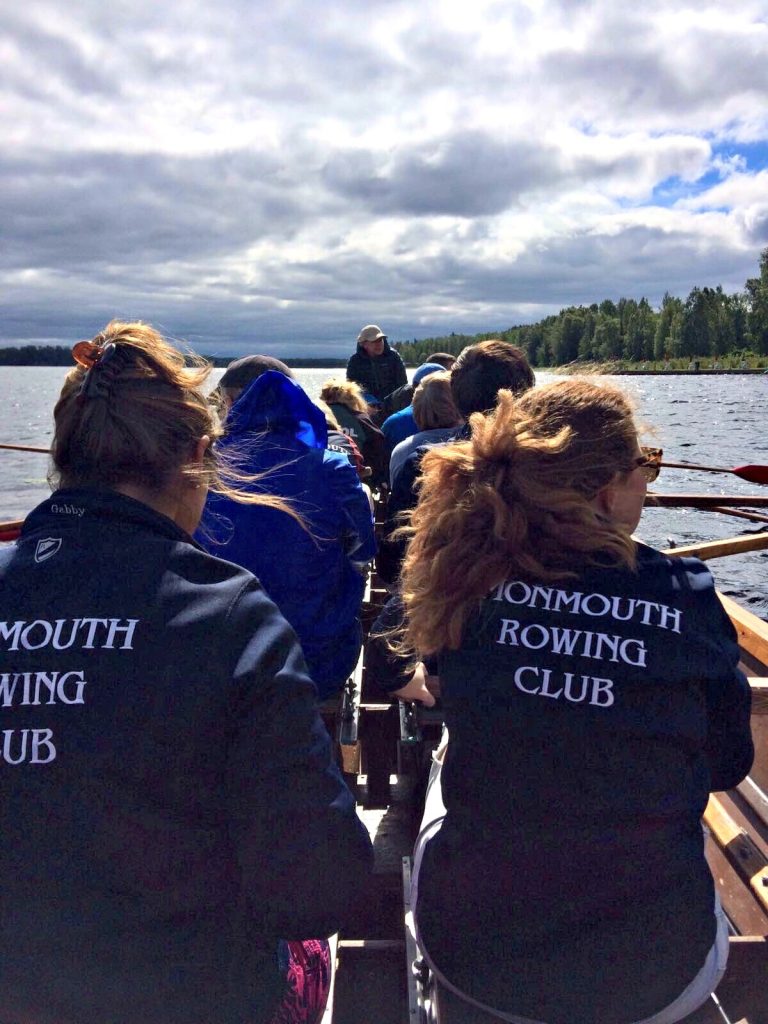 The afternoon before our event we watched the start of the 60km race (a separate event) with its thrilling mass start (see the picture at the top) – about 100 boats all jostling for position – and the adrenalin started to flow. I couldn’t wait for our turn. 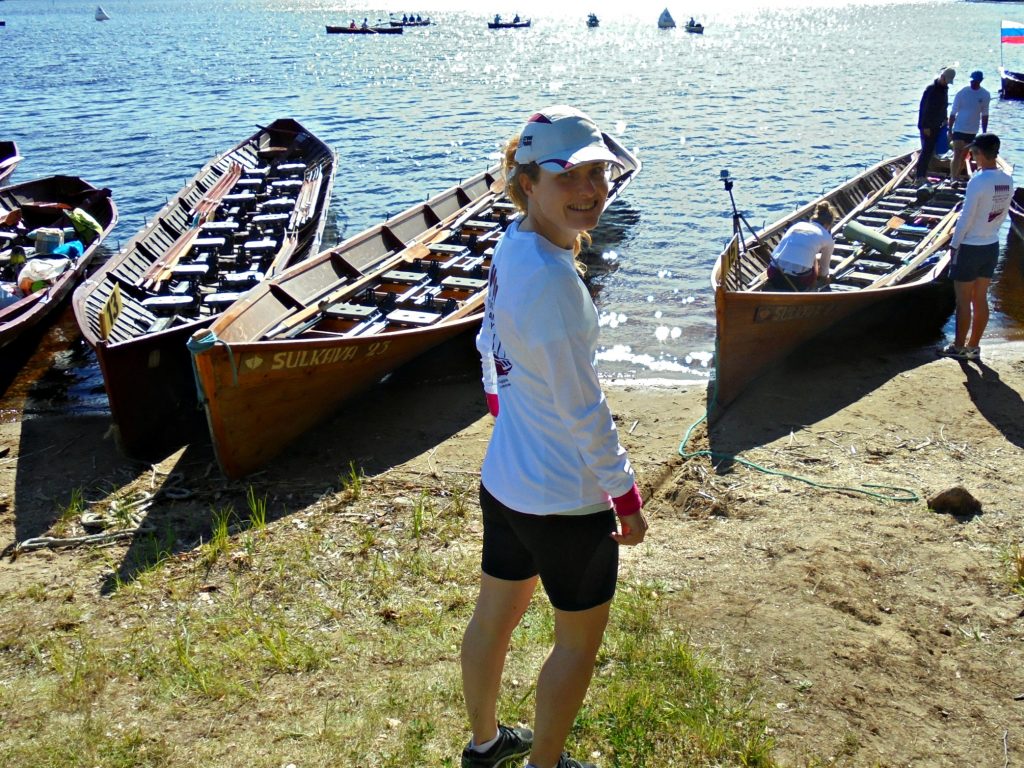 Just before the start – getting excited…. After a pretty restless night (we were sleeping in classrooms in the local high school, to add to the atmosphere) we set off with a blistering start. We had a crew of Cornish gig rowers in our sights – after we’d heard their Cornish-style trash talk we knew they were definitely the ones to beat. The race was on and as we took the lead it dawned on us that we were actually strong contenders to win the whole race. Except for one thing. It, er, cough, turned out to be not strictly a race. Our two day event was, it transpired, more of a tour, which explained why some of the competitors were rowing in traditional costume and others had rigged up a dining area in the middle of their boat. But we didn’t know this until after the end of the first 35km, so we gave it our all and rowed hell for leather for three hours until we reached the island where we were spending the night. How the Finns must have chuckled to themselves when they saw us straining every sinew to win a race that never was. Still, rowers to our very core, we weren’t going to let a small thing like lack of competition stand in the way of a good race, so decided without a moment’s hesitation that we would row the second leg at the same pace and finish, Monmouth-style, with nothing left in the tank. There was, after all, still plenty of pride at stake. 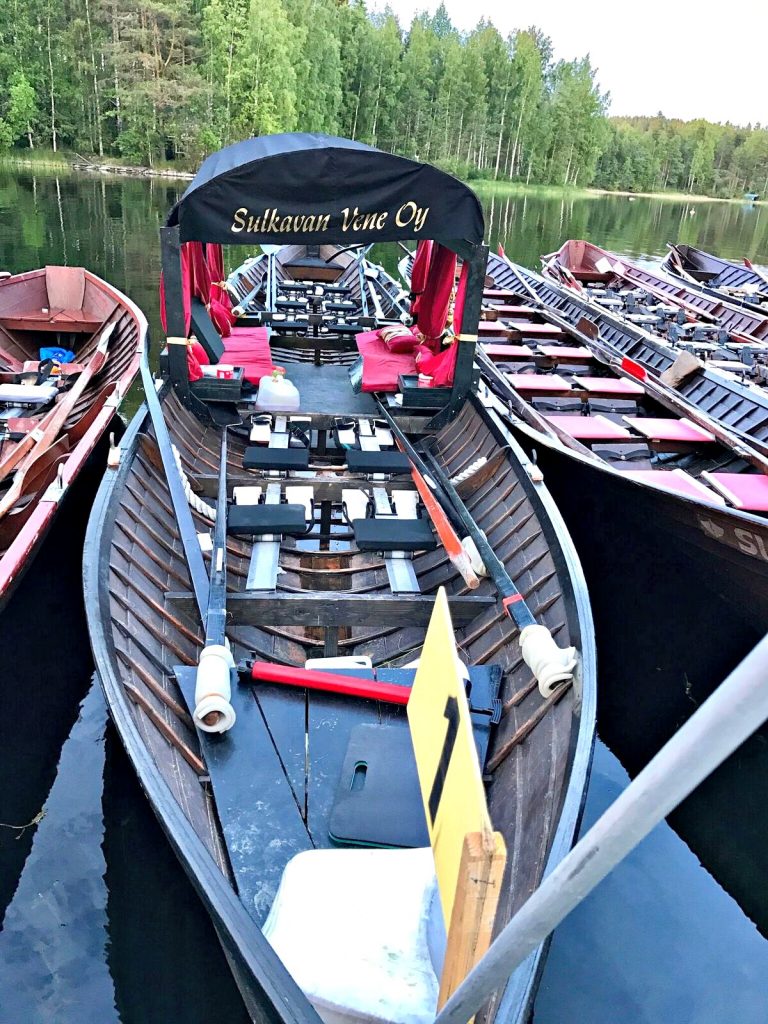 The stiff competition. Note the onboard cafe!

This was all very well, but there was the small matter of the lack of training. As I crawled out of the boat after the first 35km I realised I couldn’t actually make my legs work. Everything had seized up and I was convinced I’d done something horrific to my hamstrings. I somehow hobbled to the campsite and collapsed on to a mattress, genuinely wondering if I’d have to cox the whole of the next leg (I’d been pencilled in for the final quarter). But help was at hand. The Finns, it turns out, know a thing or two about recovery. After a couple of hours and a couple of long drinks (a brilliant Finnish invention of gin and grapefruit juice and my new favourite drink) I was ready to hit the sauna and this, I’m convinced, saved me. The gorgeous lake where we swam

After some initial British coyness, we bowed to Finnish custom, discarded our clothes and were soon hurling ourselves into the lake with abandon in between sauna sessions (it was, I hasten to add, a single sex arrangement). An hour later we emerged, refreshed, renewed and with silky soft skin. It was little short of a miracle – so much so that I even offered to row the whole of the next leg if the other cox wanted to stay put (she didn’t).

Coxing presented a whole new challenge with some tricky navigation, tight turns, a poker face to mask occasional feelings of panic when I feared I’d lost my way, and some motivational techniques to keep a crew with bleeding hands and aching limbs going to the last. They pushed through the pain like heroes and we finished the race having passed every crew in sight (including those with animals on board; “I’ve got their dog” is now my favourite coxing call”), proudly flying our Welsh flag and feeling like we’d given our all. 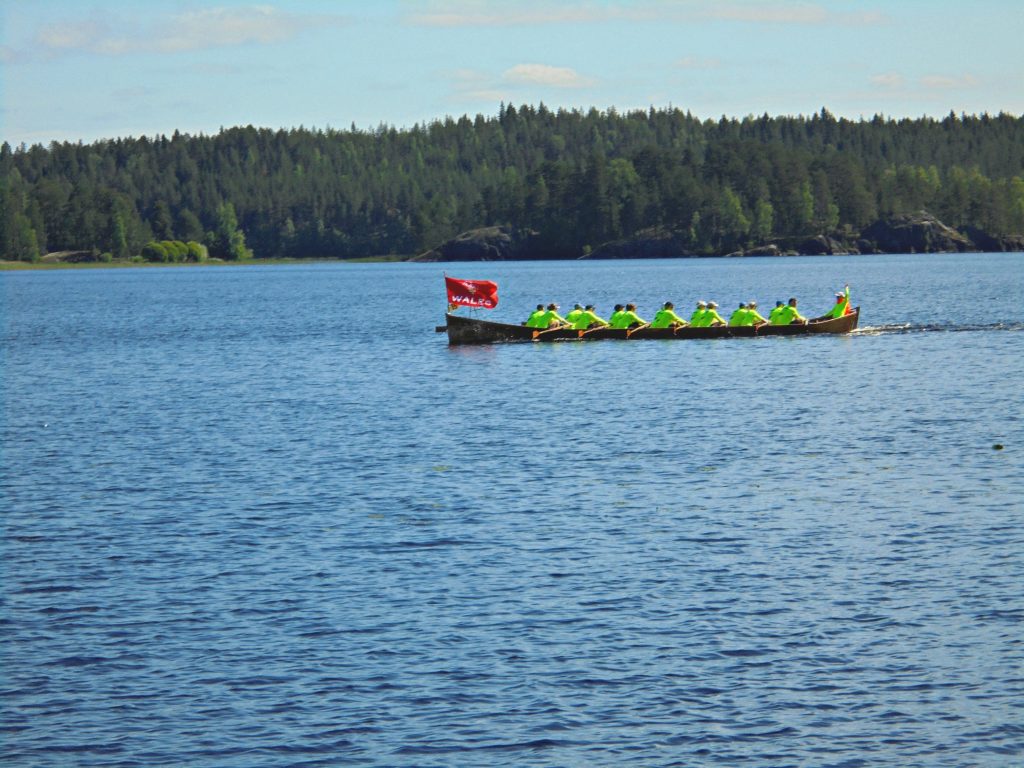 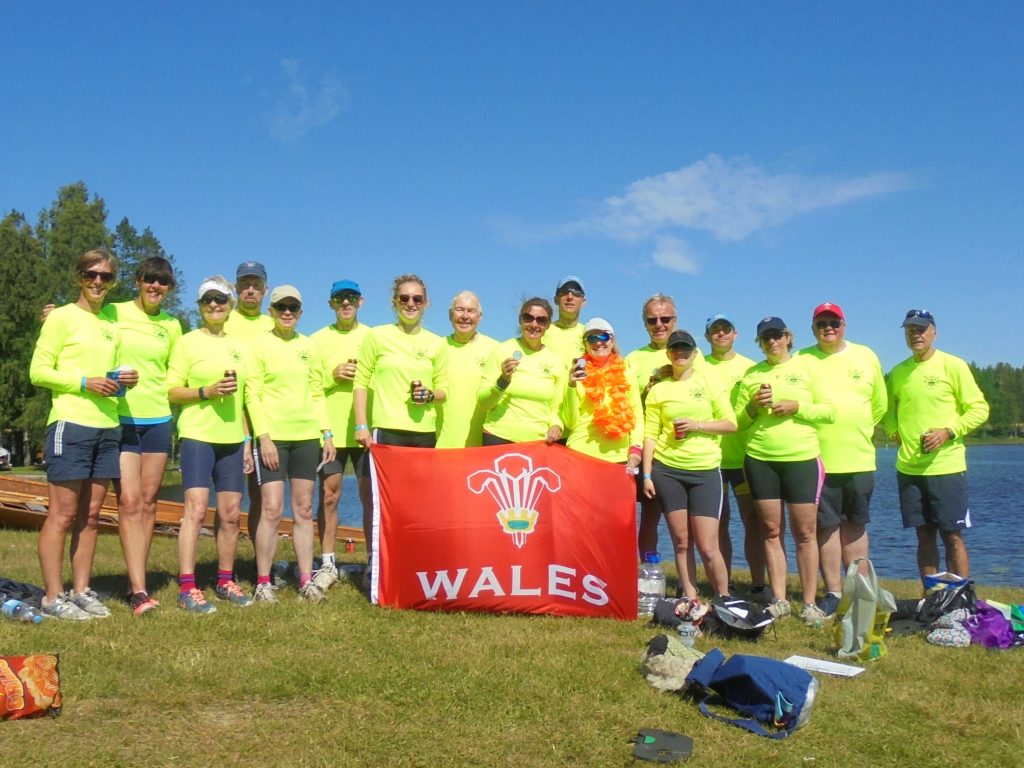 Winners, one way or another (Girl on the River wearing the cox’s garland!)

Our aim when we’d set off was to do ourselves proud and have some fun and I can safely say that race or no race, we achieved both. We laughed until our sides ached (in some cases until we were too helpless to row, but that’s another story… what goes on tour…) and had a thoroughly satisfying row, fully justifying the commemorative medals they gave us. 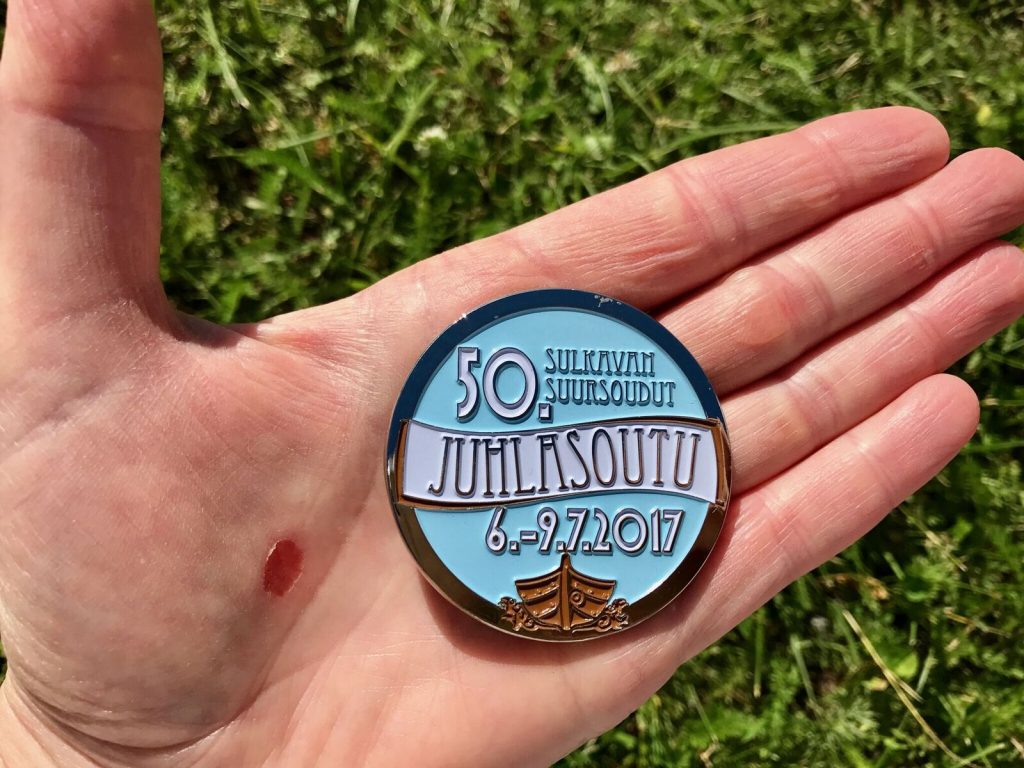 Medal with accompanying blisters and rips

Two weeks on, I’m aware it took its toll on my health – I’m not yet fighting fit and can feel the odd ME/CFS symptom still lurking around – but it was so worth it. I couldn’t have rowed – or partied – with a better bunch of people and I’d go back in a flash.

So thank you, Sulkava, for hosting us so brilliantly, to my fellow rowers for rowing like bosses and being such excellent company, and of course to our brilliant support team who ferried us around, fed us crisps and beer when we were too weak to open the packet and even found us an extra tent when it was all getting a bit too cosy. Be warned, Sulkava, you haven’t seen the last of us. And until next time, kippis!